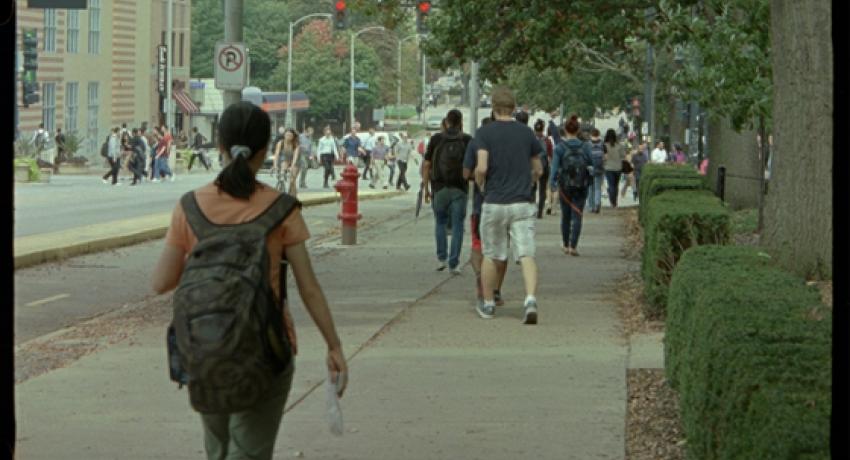 A 16mm film frame is not very large, so it's reasonable to wonder if there really is enough information in the frame to justify a high resolution scan (2k or higher). Conventional wisdom says that there's really not much more than 2k (~2000 horizontal pixels) worth of data there, but in fact, there are some real advantages to scanning at higher resolutions, even if you only require a 2k scan. Here, we look at a single frame of film shot on Super16 that was scanned at 2k, and again at Super2k: a special mode of our scanner that uses the full 5k sensor, but outputs a 2k file.

In the image above, notice the signs in the background above and to the left of the woman walking away from the camera. Specifically, the vertical sign for the restaurant, and the small blue horizontal sign above the red and white striped awning. We'll focus on these because they contain text.

Before we get into that, some background: our scanner uses a sensor with more than 5000 horizontal pixels, in a form factor that's roughly the size of a 35mm film frame (slightly larger, actually). The scanner itself uses high quality, high MTF resolution optics to focus the film frame on this sensor. When the scanner is in regular 2k mode, a 2500 (horizontal) pixel window in the middle of the 5k sensor is used. The sensor and lens are physically closer to the film in this mode, so the image only covers about 1/4 of the sensor's physical surface. It's still using a full 2.5k pixels with no scaling, binning or other in-sensor manipulation, so it can be compared to scanners that have a native resolution of about 2k, including our previous generation ScanStation. We're able to run the scanner at up to 30 frames per second in this mode to ouput a 2k scan. The extra 500 pixels, by the way, are used by the scanner's optical pin registration system, to align the frames and create a steady image.

When the scanner is in 5k mode, (15fps top speed), the camera and lens are physically pulled back from the film, so that the image fills the entire 5k+ sensor area. This uses about 4x as many pixels to resolve the same frame of film (approximately 20 megapixels), and the result can be pretty spectacular! In Super2k mode, the full sensor is used to capture the frame, but the scanner scales the image back down to 2k in hardware, in real time, to give you a 2k image that's the same dimensions and file size as a regular 2k scan, but markedly sharper. This is what we call Super2k.

This is the the frame at 100% magnification, showing just the area we discussed above so we can take a good look at the details. Notice that in the Super2k all of the text is clearly readable with sharp edges and more clearly resolved grain.

And here it is, magnified in Photoshop by 200%.

Again, notice how much sharper the text is, but also take a look at the other edges - edges of buildings, the clearer rows of bricks, the crisper separation of text from background. In general there's just better definition and the grain is much more finely resolved.

As you can see, there are some compelling reasons to consider Super2k as an option if your budget doesn't allow for UHD or 4k scanning, especially if you're working in 16mm. If you're interested in getting your 8mm, Super8 or 16mm film scanned to the highest possible quality, please contact us.

By the way, if you want to check out the actual scan files for yourself in 16bit DPX format, as they came off the scanner, here are some links to download them. We recommend opening these in Photoshop or a color grading tool such as DaVinci Resolve:  Graded files: Regular2k, Super2k  ---  Flat Scans: Regular2k, Super2k